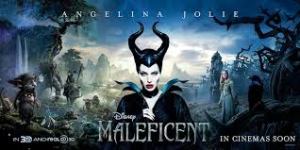 Yesterday, I took the family to see Maleficent, and the following contains SPOILERS – sort of.

In this reimagining of Disney’s classic “Sleeping Beauty,” a pure-hearted fairy protector turns vindictive after she’s betrayed by a human who uses their acquaintance to gain the throne. To get her revenge, she shackles his child and kingdom with the unbreakable curse familiar from the classic tale, but later grows to regret this petty act and to love the child she has cursed and to seek to undo what she herself has made undoable.

Which is all very well. It’s nice to see the female characters recast as something akin to actual people. It’s nice to see both the king and Maleficent retold not as one-dimensional archetypes but as people with imperfections, vices, and redeeming virtues. However, for me, there is far more wrong with this story than these virtues can heal.

First, the ending is transparently clear from early on–from the first scene after the child goes into exile with her “aunts”. Once this ending approaches, it become clear that a pointless battle must occur to fill up the remaining time in the film. The battle occurs, but there is only moderate peril and a somewhat unlikely resolution. To be fair, I have found that since I started writing, I’m surprised by very little in any film, so it might just be me.

Second, if Maleficent has depth, the entire rest of the world is reduced to puppetry. The king’s youthful actions are capricious. As an adult, we feel for him only at the moment of the curse, and next see him as a virtual lunatic who we can neither sympathize with nor despise. The prince is now the throw-away archetype that the princess was in the original telling–and I don’t see how that’s any better than the original sexism. The other characters act and appear at the whim of one king or another or at the flick of Malifecent’s hand. The kings wife just conveniently goes away, as apparently has Maleficent’s parents and support system, to the detriment of all.

Third, the story is conveniently inconsistent. There is a point in the final battle when, consistent with the story so far, Maleficent could easily arrange her servant’s escape but doesn’t–because the story requires that someone else intervene. Multiple scenes set up the premise that when fairies contact iron, they are instantly and painfully burned, yet when a heavy iron net is dropped on Maleficent, she seems only mildly inconvenienced and then instantly recovers. At the start of the film, Maleficent is respected as the future protector of the fairyland “moors”, but after her betrayal, all the other fairies vanish even though she clearly still has more than enough power to protect them. This gives the entire world the feeling of a convenient plot element.

At the end, Maleficent restores the fairy moors and bestows a fairy crown on the girl, declaring the two kingdoms to be finally united. Which is what you WOULD say, I guess, having vanquished the army of the neighbouring kingdom and thrown it’s ruler from a tall tower. Okay, he was trying to kill her for no clear reason, I get it.

Finally, the pacing—-oh the pacing. On the one hand, I didn’t feel than key relationships were developed sufficiently. On the other hand, there are whole swaths of film that needed to be tighter–like when Maleficent’s crow, acting in the role of aerial recon drone, makes several forays into the kingdom tell us things that were obviously going to happen. Then in a pivotal scene of redemption, I found myself thinking less about the poignancy of the moment than about how the filmmakers had wasted a gaping opportunity to draw out the tension and amplify the power of the moment.

My youngest daughter gives the film 9 out of 10 sprinkles. I give it about five. It isn’t that it was bad, I just thought it could have been far more emotionally powerful and that Disney fumbled away the drama at nearly every step. But then, I am not the target demographic, and I’m a writer, so my brain is kind of warped. Oh yeah, and Angelina Jolie did pretty well with the role, such as it was. There was one scene of genuine poignancy in which ladies throughout the theory could be heard squeeing into tears. If only there could have been a few more such moments.