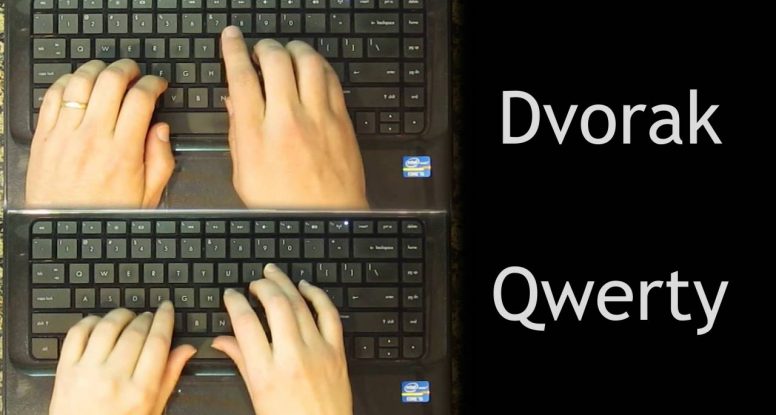 The QWERTY keyboard layout, the defacto standard derived from the Sholes layout popularized by Remington in the early 20th century, has a bad rap. It’s generally seen as either a failure of market forces or a failure of regulatory oversight, depending on your political bent. After all, Sholes designed his keyboard to prevent the jamming of keys in an antique mechanical typewriter, while Dvorak set out to rationally engineer a keyboard optimized for high-speed typing. Such a keyboard is obviously superior, and it’s only the inertia of the market that has kept the world from reforming.

There’s only one problem with this. It just isn’t true.

Oh, Sholes did design his layout to prevent jamming, but he did this to speed up typing, not slow it down. He was, after all, in an economic death struggle with competing inventors, and while his approach was more intuitive and experimental than Dvorak’s, modern analysis shows that he actually developed a remarkably good layout by the three measure we now know to be important:

According to Norman and Rumelhart, although the Dvorak layout is superior in the first two regards, QWERTY excels at the latter, and the effect is essentially a wash.

So how did the myth arise? Mostly from Dvorak himself, who like anyone acting on a sincere belief that his reasoning must be correct, stretched the truth more than a little. Then there was the Associated Press report of a US Navy study in which novices using the Dvorak keyboard “zipped along at 180 words a minute.” Only it didn’t happen, and the Navy Department, in an October 1, 1943 letter to the author said it had never conducted any such study. (Foulke, 1961). Apparently, the AP had transposed the “8” and the “0”.

The navy had in fact conducted a study; they just didn’t find the spectacular results that the press like to pick up and amplify, and that Dvorak himself was keen to see. In fact, the navy study was deeply flawed, and really only measured “the Hawthorn effect.” This term stems from ergonomic studies at a Michigan auto factor early in the century that found similarly surprising performance improvement when experimental changes were made on an assembly line—any changes. The researchers finally realized the obvious: workers speed up when they are being watched. They also speed up when they are taken away from their normal work environment and told their speed is being measured, as was the case in the navy study.

So forget the navy study. It’s rubbish. In 1956, though, Earle Strong conducted a careful scientific study of typing for the US General Service Administration. He found that expert typists took 23 days of Dvorak training to match their previous speed on the QWERTY layout. They then continued to train alongside an equal number of QWERTY typists, and were unable to keep up. That is, in direct, head-to head competition between highly skilled and motivated typists, the QWERTY team outpaced the Dvorak team, and Strong was forced to conclude that there would be no value to the government in retraining its workforce.

Typewriting sprints on both QWERTY and Dvorak layouts have exceeded 210 wpm and have been so close over the years that no conclusion can be drawn.The fastest sustained typing (over 50 minutes) ever recorded remains 150 wpm by Barbara Blackburn using the Dvorak layout, however, given that Dvorak typists usually take it up under the expectation that its myth is true–and therefore are clearly over-represented by people intending to train for speed, it’s dubious whether we can draw any conclusions from this. Did Barb make the record books because she typed on Dvorak or because she tried really hard? In 1959, Carole Bechen typed 176 words a minute for five minutes on QWERTY, but does this prove anything either?

The record books don’t represent real world typing, and anecdotal evidence isn’t evidence at all. Here is what researchers have found:

“No alternative has shown a realistically significant advantage over the QWERTY for general purpose typing.” (Miller and Thomas, 1977 509)

“There were essentially  no differences among alphabetic and random keyboards. Novices type slightly faster on the Sholes keyboard [QWERTY] probably reflecting prior experience… Experts…showed that alphabetic keyboards were between 2 and 9 percent slower than the Sholes and the Dvorak keyboard was only about 5 percent faster than the Sholes…” (Norman and Rumelhart , 1983, 45)

A large scientific study during the 1970s (for which I’ll add a link when I dig it up) found that most professional typists (remember, this was the heyday of typing pools and electric typewriting) average no more than 60wpm, less than half the maximum speed attainable by anyone on any keyboard who makes a good effort. Dispatchers and certain time-critical typing jobs pushed workers to 80wpm, still easily attainable with any keyboard.


So if QWERTY is the lead weight of history, dragging us down by our  fingertips, why don’t those who’s jobs depend on typing come anywhere close to its limits? Simple. The real world is not a typing competition. In the real world, typists and thinking while typing, and they just don’t need (or can’t sustain the mental effort) to put words down any faster.

In the end, Dvorak is a fine tool, well engineered, and might well be ever so slightly superior, but it just doesn’t make any difference. A $10,000 racing bike is a superior tool to my Schwinn, but unless I decide to train for the Olympics, it’s a pretty meaningless distinction.

Having presented all this, I must confess that I’ve never given Dvorak a first hand try. I taught myself to touch-type using an Apple IIe program of my own design, based on a one-page magazine article. Since then, I’ve never found typing speed to be a constraint, though I really only type up to about 50wpm. I’ve always felt that learning Dvorak is one of those things that, like balancing your checkbook in hexidecimal, you could learn all right, but at a cost to your sanity and ability to functionin the real world.

But what do you think? What is your experience? So you have studies I haven’t mentioned? Anecdotal evidence you’d like to share? Leave a comment. Send this to your Dvorak typist friend. Let them leave a note. I’m interested to know what you think.

And if you like science fiction and fantasy, pop over to my newsletter signup page for a free, signed e-sampler of award-winning stories.