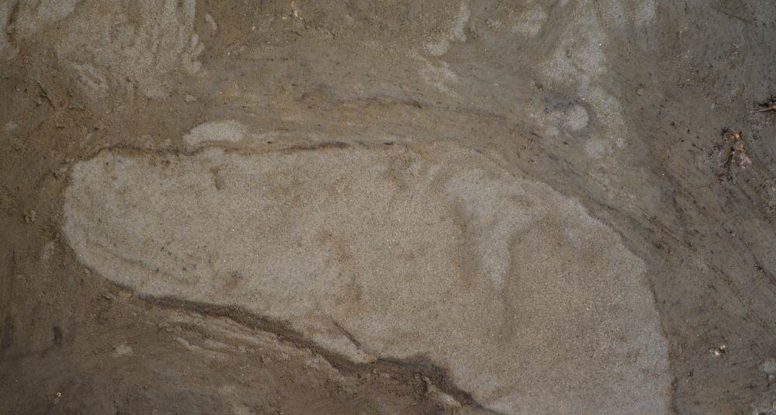 An archeological site in Denmark illustrates beautifully both how fossils form and why they are so rare.

Field archeologists from the Museum Lolland-Falster in Denmark have been investigating a stone-age coastal site exposed during excavation for a new tunnel. When this site was occupied over 5,000 years ago, sea levels were rising due to glacial melt. The site was a fjord on the island of Lolland in Denmark. It continued to flood with rising sea levels until construction of a flood control dyke in 1877 left it high and dry.

During stone age occupation, the locals made extensive use of “fish fences,” wooden fences built in the mucky clay inlet and used to trap fish using tidal currents. From time to time, the fences were moved or repaired as conditions changed.

Lars Ewald Jensen, the museum’s project manager, says “What seems to have happened was that at some point they were moving out to the [fish fence]…at one of the posts, there are footprints on each side of the post where someone had been trying to remove it from the sea bottom.”

As two people worked, their feet dug into the soupy clay, then were filled with sandy silt, probably stirred up by a storm shortly thereafter. Because of that, the prints became casts which remain in place 5,000 later, along with traces of the wooden post.

That these prints were preserved this long is remarkable. Obviously, the conditions that made this possible are rare, though over thousands of year, they are far from unique. The prints are not yet fossils, but if we hadn’t intervened, geologic processes might eventually have made them so.

The Roman invention of concrete relied on a form of naturally occurring cement. This, or any of several other types of natural chemical environment could turn these prints to stone at any time—even within days. Failing that, imagine what might happen if the prints were covered in situ by repeated silting events, or by any of several types of volcanic deposits, and were then subjected to increasing heat and pressure within the Earth. This would take far longer—millions of years.

There are all sorts of natural processes that could intervene to fix the prints as stone, or that might have petrified accompanying organic remains, but the odds of this happening were never good. At any point, before or after fossilization, nature can intervene to destroy the remains. In this case, nature provided a group of clever apes with shovels and machinery and museums, who will inevitable destroy the prints in far less than geologic time.

But in the meanwhile, we learned something, that’s what make us human.