How to Save Your Children 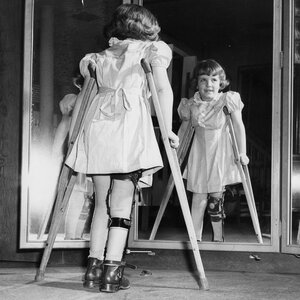 Sixty years ago, polio was one of the most feared diseases in the world.

own. Movie theaters urged patrons not to sit too close together. Insurance companies sold polio insurance for newborns.

In 1952 alone, 60,000 American children were infected; thousands died; many thousands were paralyzed.

My aunt was one of the lucky ones; she might have been the girl in this photo. She eventually learned to walk without crutches, but the leg never grew again, and she wore orthopedic platform shoes and heaved through the house like Hephaestus, or through the school where she taught the next two generations, feeling nothing of the leg but phantom pain and the stamp of deformity, not even the boiling water she once spilled on herself, not even the blood clots that eventually robbed her of her mind, and then her life.

Victims who didn’t fully recover might find themselves in an iron lung machine, well and fit, but paralyzed an in ceaseless pain, keenly aware and wondering how long the machine that drew their every breath could possibly sustain them.

The answer, as it happens, was a very long time indeed. The last American polio survivor confined to an iron lung was Dianne Odell, who caught Polio in 1950 at the age of three, and died May 28, 2008, having never left her home town of Jackson Tennessee. She died during a power failure when the backup generator failed to start.

And now I know why my mother was so terrified when, at the age of three, I told her my legs hurt and wouldn’t get up because of what turned out to be a fairly trivial form of juvenile arthritis.

In 2016, for the first time in modern history, fewer than 100 people caught Polio. On Earth.

This is because of vaccination, and a concerted effort by governments around the world, starting in the 1980s to eradicate the disease by using herd immunity to deny it a path to new hosts. This is a triumph not just of science, but of public policy and civic mindedness, as a generation terrorized by horrible disease—my parents’ generation—trusted science and government to deliver them form the threat—and triumphed.

But even those who learn the lessons of history can be doomed to watch as those who won’t screw everything up for the rest of us. Polio virus remains endemic in Afghanistan, Pakistan and Nigeria, mostly due to ignorance, religious hysteria and a (sometimes deserved) pathological distrust of government. It can still make a comeback–and we are far, far more vulnerable.