How Did We Know We Needed Spacesuits?

When early rocket pioneers started strapping volunteers to missiles, how did they know those volunteers would need spacesuits? Of course, in both the Soviet Union and the US, animals subject we tested first, but in fact, we already had aircraft flying almost to the edge of space before that–and aircraft flew higher than humans can survive even during World War II. How did we prepare for this environment? How did we know we needed to?

Well in fact, people had been flying in balloons since the 18th century, and some later balloon flights led to deaths. But long before this, in 1644, Torricelli described the first mercury barometer, writing “We live submerged at the bottom of an ocean of the element air.”

Torricelli and his mentor Galileo knew full well that we live on a spherical planet, but Galileo gave an erroneous explanation for the difficulties in using the suction pump to draw water up a well even though Aristotle had known that air has weight.

The correct explanation of the well problem is that there is no such thing as a “suction force.” Suction is only air pressure viewed from the other side of the equation, and when you suck water up a pipe, it is actually the pressure of the atmosphere pushing the water up to replace the air you’ve withdrawn from the pipe that causes the water to rise. Beyond a certain point, air pressure can’t push the water up any higher so the water begins to boil, replacing the withdrawn air with water vapor, and the suction fails.

Even with liquid that will not boil under vacuum, you cannot use suction to draw in more weight than the weight of the surrounding air can displace (plus, in some instances, capillary action) because it is only the weight of the air pressurizing the subject liquid that forces it up the pipe. 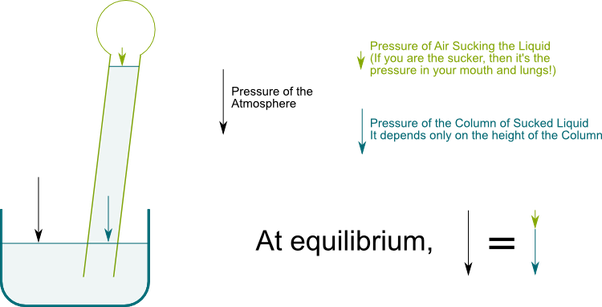 This led Torricelli to surmise that air pressure would be lower on mountains (and by logical extension, dropping off to zero in what we now call space). Blaise Pascal then continued Torricelli’s work and convinced his brother Perier (who lived near the 1,465 m (4,806 ft) Puy de Dôme to compare the air pressure atop and below the mountain, confirming Torricelli’s supposition in 1648.

Thus, from that point on, it was known that if you traveled to high enough altitude, you would soon find it impossible to breathe. Shortly thereafter, Boyle and Hooke used a vacuum pump to demonstrate what might happen using small animals.

About this time, Paul Bert determined that the partial pressure of oxygen was the key factor, and interest in ballooning kicked off a flurry of research using high-altitude stations, balloons, and later aircraft, which continued into the 1950s.

So it was well understood, long before the space age, that there would be no air in space. The question was only how best to address that minor problem.