Can We Really Touch Anything?

That depends on your definition of “touch.”

Obviously we can touch things. You are touching something right now that’s preventing you from falling to the center of Earth’s gravitational field. The thing is, “touching” may not mean what you think it does.

If you play pool, “touching” may conjure the firm crack of cue against ball, but if you’ve ever flown a kite, you know you can touch the air in a much squishier way.

Our study of the natural world has taught us that, at the atomic level, everything is “squishy.”

Clearly, in the colloquial sense, I can touch the keys on this keyboard and depress them. 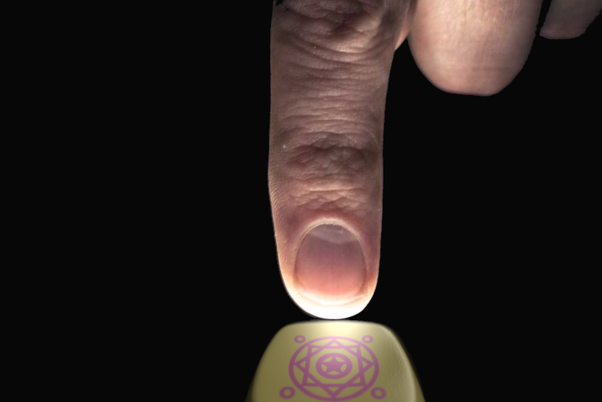 But what does that mean?

At the atomic level, molecules and atoms cannot be thought of as little billiard balls that come into definite points of contact. Instead, people, keyboards and the ground beneath our feet are all made of molecules, and molecules are made of atoms, and atoms are made of electrons clouding around a nucleus of protons and neutrons.

Electrons and other subatomic “particles” are actually quanta. Depending on how you examine them, they can behave somewhat like little billiard balls or somewhat like waves, but they are neither. They are what they are, and nothing else. They are quanta.

As my finger approaches the keyboard, the electromagnetic repulsion grows between its outermost electrons and mine. As this repulsion grows, my fingertip starts to deform. Why?

Two electrons cannot occupy the same space and the electron clouds around two atoms cannot pass through each other. Why not?

If in third grade you were taught to think of atoms like little solar systems, you might imagine electrons as little moons in orbit around little nuclear planets. You might even have been taught that if the nucleus were the size of a grain of rice laying in the middle of the Superdome, the electrons would be as far away as the parking lot. You might then wonder—with all that empty space—what stops the negative electrons from just falling in and sticking to the positively charged nucleus? For that matter, what stops two atoms from passing right through each other?

The answer is that electrons aren’t little balls, they are quanta, and the space in an atom isn’t empty.

A better way to think of electrons is as standing waves that envelope the nucleus in three dimensions. As illustrated below in 2-D, a wave can only be confined to a circle the size of which is a multiple of its wavelength. Any other size, and the wave will cancel itself out:

An electron cannot exist at any distance from the nucleus that isn’t a multiple of its wavelength. The innermost electron “shell” has room for up to two electrons, and there can be no smaller shell, because there is no circumference smaller than that that’s a whole number wavelength of an electron at any energy level.

So when two atoms approach each other, the outermost electrons cannot just slip past each other like party goers into a crowd, and they can’t “back up” into lower electron shells, because those are already full.

Sometimes, the outer electron shells can exchange charge or electrons to form chemical bonds, so if if I spill coffee on my keyboard, it might become sticky. But when I press a key, the electrons cannot get out of the way, so the force is transmitted into the molecular bonds that make up my fingertip, and my skin and blood vessels flatten a little. Then, as my finger keeps moving, the sum of all these electrons repelling each other exceeds the strike force of the switch behind the keycap, and the key goes down, well and truly “touched.”

So yes, we can definitely, really touch things, but when we do, it’s by means of the mutual exclusion and repulsion of the electron waves, not the discrete billiard ball type collision we might imagine.