Hi everybody! I know I’ve been way too quiet of late, and I thought I’d pop in to give a little update–and a lesson in perseverance.

First, I sold two more stories (you are the first to know). One, my 2020 Jim Baen contest winner, sold to Analog. The other sold to Galaxy’s Edge after being my second Jim Baen finalist way back in…I’d have to look up the year.

That story, “The Snows  of Maxwell Montes” was rejected by Analog–I learned later because they had recently published a similar story set on Venus and featuring a cloud city named after the same NASA administrator. But also, the story had originally been epistolary and had not been critiqued, and after Charlie Finlay at F&SF was kind enough to send a personal rejection telling me the opening was too slow, I sent it for a round of critique, revised, and stuck it on the shelf, waiting for an opportunity to come along.

Then this year after Mike Resnick passed (god I will miss that man) Galaxy’s Edge was thrown for a loop. Without access to Mike’s mental editorial notes, and without a staff of slush readers to turn to, the published asked Martin Shoemaker to solicit a pool of submissions from writers sure to supply enough worthy stories to fill out the next few issues.

Martin asked me to submit and I wasted two precious days giving this story a final once-over. By then, he said pretty much everyone he’d contacted had sent something in, but thanks and he’s add it to the pile.

That was in time for the last issue. Yesterday I got a note from the new editor that they are buying my story. Sweet! At the rate I’m going, I’ll be the only author in history to win or place in the Jim Baen contest ten years running and professionally sell every story! Perseverance pays off.

Back in February I decided to get a teleprompter and start making videos–not to have a monetized YouTube channel but just as a way to reach more people and recycle some of my more interesting research. I’ve told you this before. I don’t see all that well, so a little $250 cell phone model wouldn’t do, and I’m cheap, so a larger $1,000 or more unit was out of the question.

I am pretty handy though, and a teleprompter isn’t all that complicated. The idea is simple: aim the camera through a piece of glass while bouncing the glowing manuscript text off that same glass toward the speaker, who can then read the text while addressing the camera. These days, a tablet can display the glowing text. That just leaves the glass.

Beam-splitter glass is just optical quality glass made to reflect a lot of light from one surface and very little from the other. If you use ordinary window glass, the reflection will be dim and will come from both surfaces of the glass equally, and the result will look like this:

Proper beam-splitter glass reflects more light off the front surface and less off the back, so the result looks like this:

That’s the ticket! The only trouble is, beam-splitter glass is expensive, and is the major part of the cost of most economy teleprompters. So I hunted around and found a deal on a cheap Chinese made teleprompter for $80. For that ridiculously low price, it didn’t matter that the thing was flimsy plastic I would never trust my camera to, or of a design than begged for broken glass. I just wanted to glass, the mounting hardware, and the cloth for screening out light.

I put in my order and waited, and while I waited, I built in a weekend, the teleprompter I’ve already shown you. And I waited some more. And I waited. And after complaining to B&H, I was told it was on backorder. The third time I asked and was told this, I gave up and ordered my own mounting hardware, planning to move forward with window glass. I made one video that way, but it was hard to read under studio lights and I had trouble controlling the app using my phone.

So I made some adjustments and waited, and waited….and waited. Meanwhile, the teleprompter I had ordered was still for sale–but now for twice the price. I suspected a mistake or scam, but hunt though I might, I could not find a piece of teleprompter glass for anywhere close to the price of the “deal”. So I waited some more. And finally, and the day I had planned to call up B&H and suggest I might call the Better Business Bureau, they contacted me to say the order had been cancelled by the supplier, and my card would not be charged.

And before I could decide whether to be angry or relieved, the very first search I did pulled up a perfectly-sized pane of beam-splitter glass for $49. Wow.

Here is the finished product, my “Tinkerator 2000”, made of wood, toy-box lid stays, hinges, an aluminum picture frame, glue, Velcro, a scrap of PVC wainscotting, $50 worth of photographic mounting hardware, a black canvas bag with the bottom cut out (to cinch around the camera lens and cut down on reflections) and a black canvas cover ( to cut out remaining bleed through from the studio lights). 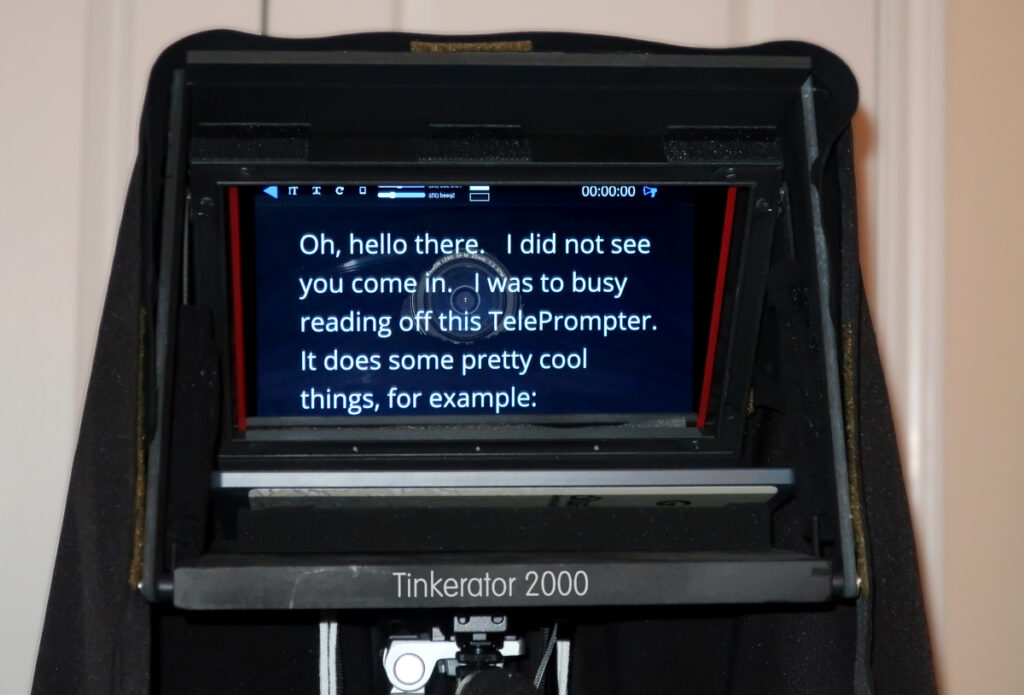 You may be tempted to think that’s digitally rendered text. It isn’t. The difference is remarkable, and this shot is made using a photo flash aimed directly at the glass–which is the only reason you can see the camera lens; in use, the camera will be almost invisible.

I need to go work on a script.

Never give up, never surrender. And don’t forget to go VOTE.