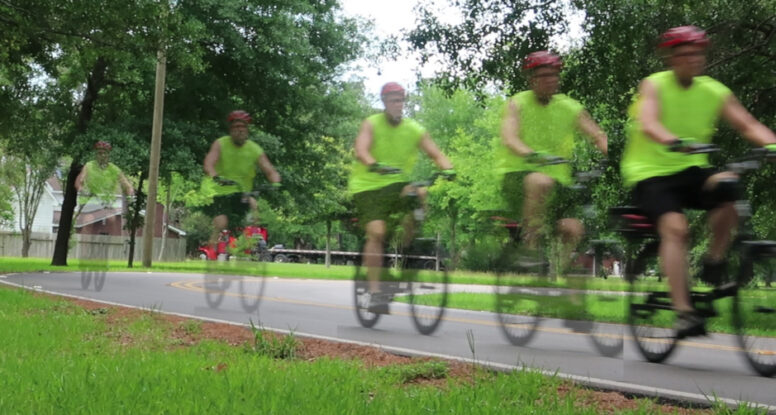 If you’re tired of losing battles with yourself…

I’m no Matt Damen, but I did okay with the ladies back in the day–I guess. I was and am a nerd. I grew up in a world of books and ideas. I was that kid in the back of the class with his nose in a book to keep from having to make small talk before class, the kid in the comedy flick who never seems comfortable in his own skin, because at just over 6’1″ and adorned in whatever my mom found on the Blue-Light special, I wasn’t. I towered over the other kids, yet let myself be bullied. I avoided sports…and stayed scrawny. When I reached college with my touring bike and access to a natatorium, that all changed, but it never occurred to me I might be physically imposing until one night in a convenience store when the checkout clerk, unaware that her friend (who had come up to shout through the door and give me shit about my t-shirt) was sleeping with me, shouted her name and flashed the international standard facial semaphore for “are you fucking kidding? He’s gonna kick your ass!”

Fortunately, I never had much occasion to employ that particular superpower (being physically intimidating) other than while carrying Christmas purchases out through carjacker-infested mall parking or that one time I walked down the Vegas strip seeking a Thai restaurant at 11 at night (do not do that). Somehow I got married, had kids, built a barn and sold a house, all without giving much more thought to my appearance than “hair should be practical,” and “clothes should probably be thrown away when worn out.” I kid you not, the first decade of my marriage, I still got my hair cut on the local Air Force base because they’d do it for $4. I only almost got an accidental flat top once.

Life rolled on, and I honestly never thought much about my appearance until I won Writers of the Future and had a camera crew following me around for a week at the writer’s workshop. By that time, I’d been around the old sun enough times to get a good job, put on a few pounds, lose them and find them again–more than a few times. I knew excess weight was a serious health risk, but not to me. I was young and healthy. I knew you don’t need whole milk and southern style sweet tea to survive, and I knew that every pound makes it a little harder to climb a flight of stairs, and I made changes in the right direction here and there and kept the wheels out of the ditch, or so I imagined. I kept thinking of myself as young and fit while the responsibilities of raising and funding a family wore on and entropy started to dig… You understand what entropy digs for you, right? That’s not too strained a metaphor? The grave, that’s what I’m talking about. Entropy digs it, puts a couch down in it, serves pie and old movies and beer if you take it, and waits for you to settle in.

No one escapes that hole, but it is largely possible to dance just out of the clutches of the third law of thermodynamics until your batteries have run down, as long as you keep moving and watch for scattered banana peels.

In 2010, I realized that I wanted to write for a living. Hell, I realized I had always wanted to write for a living, ever since I first typed my name through an ink-soaked ribbon made by Smith Corona. Realizing I’d somehow lost my vocational way was transformative step number one. I went back to school to learn or relearn what I should have paid more attention to the first time. I joined critique groups and started writing, and managed to win a little award on the first story I ever wrote as an adult. By 2011 I knew I was going to take my shot at this writing gig, but I also had a mortgage and kids and a nine-to-five desk job.

The last thing I needed, metabolically speaking, was to give entropy the gift of another few hours a day with my backside parked in an easy chair, teetering with one leg out over the great beyond. Instead, I turned to standing desks and then treadmill desks, and with the help of yet another round of lifestyle improvements, had lost all the weight I wanted to by the time I went to Hollywood to parade in my penguin suit at the Writers of the Future gala. Alas, after a lifetime spent swimming in a national sea of habitual overconsumption, all the weight I wanted to lose was about half what I really needed to for purposes of entropy evasion. Not that it mattered; I’d also injured myself severely enough to let entropy back in with the shovel and the box of donuts.

By the end of 2019, I’d let my weight creep back up as high as it had ever been, constrained only by my absolute resolution not to buy larger pants, ever, for any reason, come what may.

And then a miracle happened. The world shut down four months after I had bought a shiny new bicycle. Suddenly free of the two hours lost daily to the maniacal American self-flagulatory commute, I resolved to start backfilling the hole, this time with entropy at the bottom.

I made a face mask out of shop towels and rode around the block, then the neighborhood, then the neighborhood next door, then all three neighborhoods available without crossing any major roads. I kept at it, generally taking two rides a day to let my poor joints recover. Through the godawful heat of the Texas summer, the godawful cold of darkest winter, through sleet and rain, snakes and bats, and bands of unvaccinated schoolchildren, on I persevered. I met the new spring refreshed, renewed, and adorned in padded shorts and chain oil-stained gloves. And then another miracle gave us the vaccine in unprecedented time. Entropy, that bastard, would soon be calling me back into the routine that had robbed me of twenty years of feeling truly alive. I doubled down, improving my diet yet again, and riding 12, 20, sometimes 30 miles in a day, weather and fitness permitting.

Ladies and gentlebeings, Entropy can kiss my sweet ass. At the risk of delivering TMI, I’ve lost 16 lbs since the mask came off in April (when I doubled down), 48 since the start of 2020 (when I started half-assing it). I’m over 6’1″ so maybe it doesn’t show as much as it might (or maybe it does and you’re all too polite to say anything), but that’s 20% of my body weight.

And before anyone asks, no; there is no “cleanse,” pill, program, bloodletting, amputation, or “crash diet” involved. Even MyFitnessPal, the calorie tracking app I used back in 2013 no longer works on my phone. We are expected these days, to comfort unsuccessful weight-loss attempts with the consolation, “It’s not just a matter of willpower.” And that’s true enough; You aren’t a loser or a weak-minded wannabe Imperial Stormtrooper because you enjoy a nice latte before Zumba class. Four billion years of evolution will not quietly sit by and watch you starve yourself to an ideal weight. Weight control is hard when your kind evolved in perpetual scarcity but you now have access to direct to your door pie delivery.

Nor, kind reader, is my purpose here to give specific prescriptions to those desiring to follow my example. You walk a path different than mine and I am not competent to guide you.

No, my thesis is to remind you that for any difficult undertaking, be it control of weight, mastery of a new skill, or transition to a new career, willpower may be insufficient to see you through but determination is an absolute prerequisite.

That word–determination–I choose quite deliberately. I have never known a smoker to quit on account of health concerns. My own father kept smoking for a decade after being diagnosed with emphysema and only quit when he literally no longer had the strength to cross the street to buy a fresh pack. Yet, people quit smoking all the time. They wake up one day, look in the mirror, notice the tar stains on their linens or get a good whiff of the ashtray, and say to themselves “this is not who I am.”

Change is hard, surprisingly so for a species adapted to the African savanna that has walked on the surface of the moon. But it’s easier if instead of viewing change as an activity to be endured, you approach it as part of who you are. You don’t have to discipline your kid the way the Bible says just because your daddy had a temper. You don’t have to eat fried meat pies or fish & chips just because they were a convenient lunch to half-starved English factory workers a century ago. You don’t have to shake hands or eat birthday cake or drink sugar water or smoke cigars or wear painful footwear just because you happen to have been born in a sliver of the world where lots of others do so. You are in charge of you, and as much as we like to tell ourselves this or that or the other thing “runs in the family” as if our genes were the hands of fate, the truth is that for most of us, what we really inherit is nothing more than tradition, habit, choices made lightly generations ago by people in a different time and world.

Whether it’s losing weight, becoming a writer, learning a craft, or God help you, climbing the corporate ladder, live your life, be you instead of your ancestors, and just as the song says, if you want to be somebody else, change your mind. That’s how you do it. There is no shortcut. It can take many starts and attempts, but it really is just that simple. You just have to look in the mirror, decide who you want to see looking back, and become that person.

If you want to be somebody else, if you’re tired of losing battles with yourself, change your mind.