In its ten years of operation, Taos Toolbox has become one of the best-regarded Milford-style advanced novel writing workshops in the country. With Worldcon in Europe this year and a major novel rewrite on my agenda for the year, I decided to apply. I consider myself very fortunate to have gotten in, as George R.R. Martin is teaching this year and while Walter won’t tell me how many applicants he got, he did confirm it was a record.

So I’m in. I flew into Albuquerque Saturday and took in the sites with Aiden Doyle from Australia and Simone Heller from Bavaria. We went to the Atomic Energy Museum and the Museum of Natural History, where we chatted with a fellow named Ed who flew on an anti-submarine helicopter during the Cuban Missile Crisis. Hi Ed. You rock, man.

I even hiked through 95 degree heat to see the petroglyphs–and a jackrabbit:

Then it was up another 4,000 feet to Angel Fire, through winding switchbacks displaying billion year old sediments, heaved up into mountains when the T-Rex hunted in the area. But now we are down to work.

Nancy Kress and Walter Jon Williams joined us last night for orientation, then it was a ful 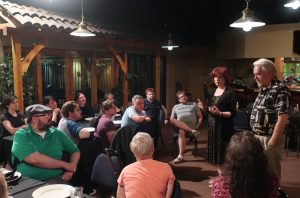 l day of Milford style critique and two lectures…followed by homework and hours of writer talk at the bar.

Now, to bed and dreams of bears and prairie dogs.