If you grew up listening to music from the great age of vinyl records, you probably recognize this image: 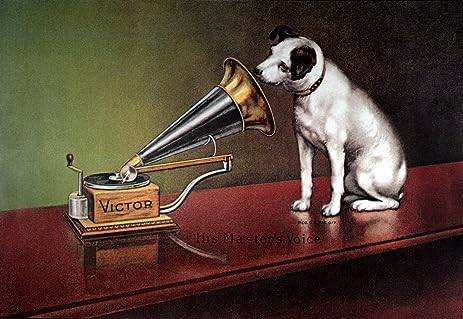 This (often in line drawing form and often with the words “His Master’s Voice”) was used as a logo for the Gramophone Company in England and in the US, the “Victor Talking Machine Company,” and later HMV, JVC, and RCA Victor, starting from 1899 and conspicuously through the twentieth century until the CD era, though is is still retained and used by RCA records to this day. Indeed, record advertisements in the first half of the twnetieth often advised patrons to “look for the dog.”

The Trademark, though unorthodox by today’s commercial standards, became immediately iconic, and remains one of the best known in modern commercial history. What you might not know is the story behind the painting that started it all.

According to contemporary publications of the Gramophone Company, the terrier, “Nipper”, belonged to one Mark Barraud, brother of the English painter, Francis Barraud. When Mark died, Francis inherited Nipper along with a cylinder phonograph and recordings of Mark’s voice. Francis’s painting portrayed the peculiar way the dog reacted to reproductions of “his master’s voice.

It’s not clear if this story is entirely true. Wikipedia lists Francis as son of famed English portraitist, Henry Barraud, and he as having two sons, Francis and Herbert Rose. Still, if might be only a distortion of detail.  The painting is known to have originally included Barraud’s own wax cylinder phonograph, an electrically driven model in a distinctive round-cornered case, made by Edison for the British market. This type of machine was made for recording as well as playback, and used a razor blade to “erase” recordings by shaving down the wax. The more familiar disk type phonograph was added by Barraud as a condition of purchase.