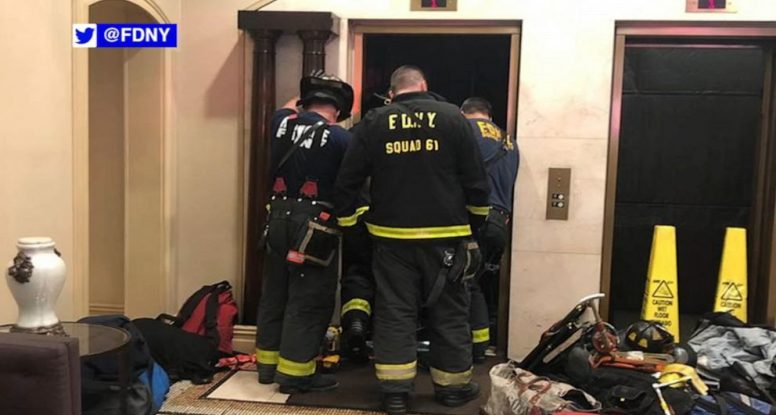 How to Stay Safe in a Lift

A man was tragically killed this week in Manhattan, trying to climb out of a malfunctioning elevator. Tragically, because what he did was very stupid. Understandable, but stupid. I’m writing this to make sure you know better.

Sam Waisbrenust, had lived 30 years, presumably much of it in the company of the elevators ubiquitous in modern cities. He likely had never been in a car when it started to move with the door open–like it did after the man in front of him stepped out. But this car started down, the doors still open. Something was wrong, very wrong. So Sam did what anyone might have done…he died.

The New York Post has a video of the event you can jump to if you want to see it. It isn’t gruesome or anything, but it’s difficult to watch.

It didn’t have to be that way. Elevators are designed by engineers who understand that every machine eventually fails. They have redundant carry cables and counterweights to prevent free falling. They have fail-safe mechanical brakes that prevent them from ever falling faster than they are designed to, plus a margin of error. If all else fails, they operate above an energy absorbing crash pad, which if everything else fails, can stop a plummeting car gently enough to save the occupants. They might get shaken up, but they’ll be okay.

But Sam didn’t know this, or Sam had never thought about it and wasn’t prepared. He might have seen cars move a bit with the doors open as automatic systems correct for faulty sensors and come to accept that as normal. He might have instinctively sought to block the car, not realizing that the car weighs thousands of pounds and cannot possibly be stopped by a man. He might simply have not been paying attention.

Whatever it was, he was crushed to death in front of the other five passengers who had to ride down (safely) to the basement with his corpse and then sit there an await rescue. It’s hard to imagine anything more horrible, and I’m a writer. And this has happened before–notably in Houston, where a doctor was decapitated in front of a woman he was attempting to aid after an elevator malfunctioned in our medical center.

Sorry to be so graphic. It is my sincere hope to leave a lasting impression.

When using an elevator, stay clear of the door.

I used to work with an Agee who thought it gallant to stand in the lift door, blocking the sensor with his body while the ladies got in and out. It isn’t. It’s stupid. DON’T DO THAT, EVER.

There is a limit to how fast an elevator car can accelerate–even under mechanical power–even if it suddenly falls. Even the car is stationary before you start moving, you can get through the door in less than that time (just make sure there is a car there before stepping through the opening). If the car is moving…if the floor isn’t aligned…think carefully before entering the meat slicer.

As long as the elevator is acting like it ought to, get through the door, then stay clear of the door. If the car behaves strangely in any way, do not put your body anywhere it can’t get out of before the laws of physics permit the car to move far enough or fast enough to squash it. If you see a car acting oddly, report it. If you simply must recall a closing door, swing your hand through and clear in one motion. You’ll probably break the light beam and open the door. If not, you’ll still have an arm and the body it’s attached to.

Make it a habit, and you’ll never be the corpse at the bottom of the shaft when the FD guys show up after some eventual malfunction.