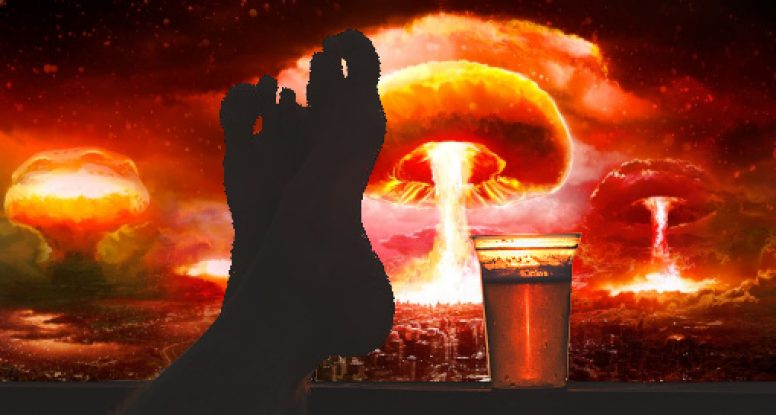 How to Survive Nuclear War

I grew up at the tail end of the Cold War. I’m a nerd, and I used to play “camping” under giant vinyl sheets my dad brought home from the Air Force which I later realized were maps of aerial bombardment exercise ranges in central California. My dad’s job was to fly off on a moment’s notice never to return and convert thousands of Russian children very much like me into radioactive corpses. We didn’t worry too much, as we understood the point was that no rational person would start such a war knowing how it must inevitably end.


The problem of course, is that the world is full of irrational people, and even the most rational can surround themselves with sycophants who enable their delusions and ill-founded conclusions. That’s exactly how the quite rational and industrious leaders of Japan concluded in the 1930s that Americans were soft and weak and ill-equipped for war and would roll over if struck hard enough, and we all know how that turned out.

So here we are, having survived the Cold War without a computer mistake triggering a nice game of Global Thermonuclear War and without the fall of the Soviet Union dropping any hydrogen bombs we’re aware of into the hands of any terrorists dumb enough to bomb Times Square and invite their own destruction, and again we face a Russian leader, driven apparently by no more than ego, attacking a neighbor ostensibly for the crime of desiring protection from just such an attack…

Yeah so…people are worried, and I know a little about nuclear war and how to survive it.

First, hope it’s a small one. A single nuclear blast (large or small) is survivable if the initial blast, flash, or fire doesn’t get you. The old “duck and cover” drills weren’t as mad as people make out. Ducking when a nuke goes off can save you getting an instant UV tan of the eyeballs before being cut to bits as the windows are blasted in. Whether it can save you depends on how far away and how large the blast is, and a zillion other things you can’t control. So duck and cover.

If you are really worried, buy iodine and calcium tablets and a modern Geiger counter now. Build up at least two weeks worth of food and water, some portable, full face respirators, and some of those Tyvex painter’s suits. Plan where you would camp out with the most mass possible between you and the outdoors, and with protection from dust infiltration assume the windows are blow out.

Why? 90% of the high-intensity, short half-life radiation from fallout will be gone after two weeks, but that doesn’t help much if you don’t know how much is around to start with. So you need a Geiger counter and basic knowledge of exposure.

And you might be injured or otherwise forced to move. A painter’s suit and P99 filter mask won’t protect from radiation, but it will keep out the dust and let you move without overheating to seek rescue or a safer location, and then you can clean up. Mild, short-term radiation sickness won’t kill you, and even the most severe cases in Hiroshima/Nagasaki went on, if other injuries didn’t claim them, to live normal lives with a modest elevation in cancer risk and some other ailments.

The iodine and calcium are to saturate the body with as much of these as it can take up so it doesn’t absorb the radioactive isotopes of these two elements, radioactive forms of which will persist for months in the case of iodine and decades in the case of Strontium (which the body treats like calcium) and which can cause thyroid and bone cancer respectively.

Realistically, of course, surviving a nuclear war requires some place to evacuate to where you can start a new life where the veggies don’t make your pecker drop off. We have enough cities and bases in the US, my plans during the Cold War were to drive to the gate near the end of the runway of the local airbase and watch the show.