A scientist of my acquaintance, in a paper just published in Nature Chemistry, has overturned a century’s work on the well-studied interaction of water and alkali metals. That’s right, there’s a whole lot more to the old sodium in the toilet trick than anyone suspected, and the science could save lives. And the best part? It all started out as a YouTube video.

For generations, students have been taught that alaklai metals (Lithium, Sodium, Potassium, Rubidium, Cesium, and Francium), in reaction with water, release hydrogen and heat, which causes an explosion. Of course, many (including myself) have noted that the amount of hydrogen involved could not possibly cause the observed reaction. Others have invoked a “fuel-coolant interaction” in which a molten metal dropped into water causes an explosion essentially driven by steam. But again, those of us who have tried this, know it simply doesn’t hold water, as it were.

Now, Phillip Mason and his team at the Academy of Sciences of the Czech Republic, in collaboration with a team at the Institute of Physical and Theoretical Chemistry, Braunschweig, Germany, have shown this all to be rubbish. Mason’s interest was peaked a few years ago when he made what he thought would be a simple and fun YouTube video illustrating the hackneyed “sodium and water go boom” trick using a $300 high speed camera. What he found, though, were colors and behaviors incompatible with established dogma. He dug, conducting a series of ever more elaborate experiments in his back yard, at his lab, and in the high deserts of the American west. Finally, he had a hypothesis compelling enough to recruit his professional colleagues at two institutes and secure the use of a $100,000 femptosecond high speed camera.

In the end, they demonstrated that the classic reaction is a “coulombic explosion” in which dissasociated electrons soluted into water 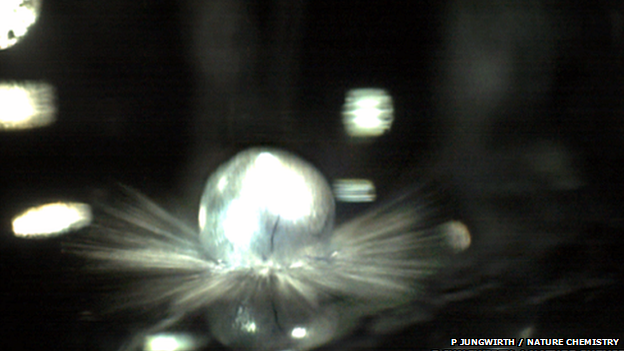 create an electric field strong enough to rip the metal apart, thereby causing a classic explosive chain reaction. In the accomanying image, you can actually see spikes of sodium being yanked out into the water–not by an explosion within, but by electric charge from without. If this seems odd, remember that the electromagnetic force is astronomically stronger than gravity, and all the devices of modern society, from xray machines to mag-lev trains rely on quite minuscule electric fields.

Why is this important? One confirmation of the coulombic explosion hypothesis came in the form of a predicted antidote to the explosion. Mix a tiny amount of surfactant into the water, and the explosion is stopped cold. This new realization could save hundreds of lives each year, and prevent millions of dollars in damage, by giving foundries the tools to finally eliminate industrial explosions that have always been something of a mystery. In addition, quantum modeling suggests that during the explosion of one liter of sodium, the charge imbalance would be on the order of five billion amps. The ability to trigger such a massive release of electric power, even for a tiny fraction of a second, will surely have commercial applications, such as, oh, I don’t know, starting a fusion reactor?

This is science as good as it gets.