Stuart: Hi Randy. Congratulations and thanks for dropping by. Why don’t you start by telling me what made you want to be a writer?

Randy: It’s what all the cool kids were doing. 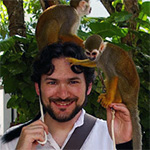 Stuart: Ha ha. Must have been an interesting school! So, in what ways have you evolved creatively?

Randy: I used to have adverbial gills and a passive vestigial tail. Now, I can cast power sentences. If I gain three more publishing victories, I will evolve into an Authorion Prime, and then I’ll really kick writing butt.

Stuart: I think I have prepositional gills.

Randy: I actually have a presentation I give on the evolutionary stages of writers that reflects the stages I’ve gone through and continue to work through, which includes:

Stuart: Of course. Are you a pantser or a plotter?

Randy: Having been shunned as a child, I do not condone pantsing anyone else, only yourself, let’s make that clear up front. However, I do think honestly most writers are a blend of both, particularly on longer projects. It is not so much one or the other but, from writer to writer and project to project it is a graduated scale, like the spiciness of salsa, or one’s sexual identity, or the quality of Start Trek movies.

Randy: Well, for the best view, why don’t you stand there above the shark tank and–

Randy: Oh, fine. Well, one thing of note is, I started using a standing desk and it is awesome.

Stuart: Hey me too! I liked it so much, I built myself a treadmill desk…

Randy: Reduces back and neck strain, allows you to dance as you write, is better for your circulation, helps burn calories, and even cuts through cans.

Stuart: “It can even cut a cow in half!”

Randy: And alas, no, I don’t get 10% commission if you mention I sent you.

Randy: Each has a special place in my heart for different reasons. I feel, generationally, a more relevant question today might be Halo or Mass Effect? Video games have reached a point where they can offer the kind of rich storyline, characters, awesome experiences, and most importantly, action figures, that we once took from movies and television.

Stuart: Action figures, yes. My favorite is The Great and Powerful Yogurt, from Space Balls. Windows or Linux?

Stuart: Good answer. I actually used to know a guy who wrote and sold software for the those. He was, umm, a nice guy? You ever dream about writing?

Randy: Indeed. I hope to some day. But until then, I’ll probably just write about dreaming.

Stuart: Very wise. When you were a kid, what was your favorite toy?

Randy: Anyone who knows me knows this question makes the terrible assumption that A) I grew up and B ) I would have only one fave. But I do remember fondly from my childhood (to date myself) my Six Million Dollar Man toys, my Evel Knievel toys, models of Star Trek and Battlestar Galactica ships, and of course video games.

Stuart: I remember Lee Majors. You know, for an astronaut and all, he spent an awful lot of his time solving crime. If, like Doctor Who, you adopted a unique wardrobe tag (scarves, fezzes, bow-ties), what would it be?

Randy: I don’t believe in popping tags. You will however frequently see me in a tie shirt (a shirt with a tie imprinted on it). But if I had my way, I suppose it would be Doc Ocs arms. I mean, come on, I could write 4 novels at a time! Suh-weet!

Stuart: Or maybe a T-shirt reading “You’d have to be crazy to become a writer.” Any last thoughts?

Randy: Why, did you poison me with iocane powder?

Stuart: You ate Stromberg’s fries??? You KNOW what happened to Stromberg, right? And it wasn’t iocane power, it was powdered nightlock berries. But it’s cool, since we are inventing this universe, we can just invent a logically consistent anti-toxin. Meanwhile, remain calm and rest here while I tell the nice folks how to find out more about you, you know, in case you make it.