As we start this year’s Writers of the Future workshop week, join me in welcoming third quarter winner, Daniel Davis.

Stuart: Welcome Daniel, and congratulations! So who are you, sir? 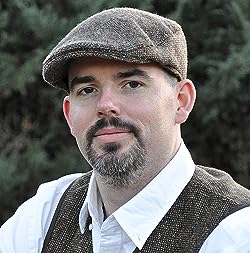 Daniel: I’m a veteran of the Marine Corps and the Army, with a combined total of almost nine years of service.

Daniel: I’m still not sure how I managed to sign two different sets of enlistment papers without either one of them saying “Air Force” at the top. I think I’m just a slow learner.

Stuart: Yes, well, where would we be without you? 😉

Daniel: I’ve also been a machinist’s apprentice, a security guard, and a building maintenance worker. I spent most of my life in Massachusetts, but I currently live in North Carolina.

Stuart: Well Mr. Hubbard always said a variety of jobs can be good for the writer’s soul. And what led you into writing?

Daniel: I’ve always had an interest in it. I used to create a lot of stories in my head when I was a kid. Most of them were inspired by movies or TV shows. I think the first one I ever actually wrote down was a knock-off of Jaws, which I banged out on my mother’s electric typewriter.

Stuart: Oh electric huh? Swanky. My mother insisted she could type 60 WPM on an Underwood. To this day, I think she was making it up.

Daniel: In high school, I tried to write science fiction stories during study periods. They were violent, nihilistic, and poorly written. I was heavily into things like Mad Max and Escape from New York at the time, so I ended up with pages and pages of gunfights and flaming ruins that were recognizably local places.

Daniel: I can only imagine what would happen if I tried to write something like that on school grounds nowadays.

Ultimately, though, writing was just another pastime. I was never especially serious about it. Publication was something I’d never even considered.

That all changed when I read Heroes Die by Matthew Woodring Stover. It was exciting. It was full of twists and turns, realistic characters, and vivid imagery. It was a story that had an honest, emotional impact on me. Even better, it was a thrill ride from start to finish.

I knew right away that I wanted to give someone else that same experience some day. Never mind great art. My ambition is to write a great piece of entertainment.

Stuart: And nothing wrong with that. In my opinion, the one is of diminished value without the other. Describe your “writer’s cave” your preferred writing location.

Daniel: The spare bedroom doubles as my office. I have bookshelves in there filled with my favorite SF/F titles, and a Japanese incense bag hanging next to the bed. The bag was a gift from my brother-in-law, who teaches English in Yokkaichi. They’re traditionally hung in a workspace for good luck at the beginning of the New Year.

I tend to write on the bed, with the dogs curled up next to me, and a pair of headphones to cancel out the rest of the world.

Stuart: Do you have any unusual talents or hobbies?

Daniel: I sing even worse than I dance.

Stuart: I like that as a talent. Like a superhero who stuns the bad guys with his dancing and then drops them with a blood curdling yodel.

Daniel: Fortunately, the only person who’s ever had to deal with that for any prolonged period is my wife.

Stuart: My condolences to her. Man, the military, bad singing, and writing. She should get a medal.

Daniel: I’ve also dabbled in various martial arts over the years, including judo, kempo karate, and kung-fu. I’m not especially good at any of them, but I have learned how to fall down, and how to laugh when someone breaks my nose. I’ve done a bit of fencing, too, which means I know at least a dozen ways to die on the end of a sword.

Stuart: Ha ha! I took Korean Kuk-Sul-Wan for a while. I really enjoyed it, but the owner gave free lessons to this very nice chap named Jose in exchange for tiling the bathroom. Jose had biceps the size of redwoods and a low center of mass, and I’m pretty sure he could have taken all of us on, black-belts included, without putting down his drink bottle.

How long have you been entering WotF? Is this your first contest win?

Daniel: This is my very first time entering. I didn’t know much about the contest until recently. I always saw the book on shelf at Barnes and Noble, but for some reason I just assumed it was an “Annual Best of” anthology showcasing previously published works. I never knew it was all original, never-before-seen work.

Daniel: One of my earliest memories is of my parents letting me stay up late to watch Star Wars on basic cable. My older sister gave me the picture book with all of the still photos from the movie, which I read until it fell apart.

Stuart: I remember my cousins had these big newsprint comic books before we ever saw the movie. I remember sitting in this ancient bed in my grandmom’s house, escaping to Tatooine. My dad didn’t understand the concept of going to see a film if you already knew the story.

Daniel: I also still absolutely love the first three Star Trek movies. I just never got too into the TV series. It was always running opposite reruns of Lost in Space when I was a kid. And Lost in Space had cooler monsters and a robot.

Daniel: I’ve been a pantser for the past several years. Since I’m not fabulously rich and famous yet, I might have to re-think that strategy.

Jokes aside, I only started to learn about plot and story structure within the last year, after I picked up a copy of Writing to Sell by Scott Meredith.

Stuart: Excellent book, though some chapters are better than others.

Daniel: Now I’m working to become a bit more methodical in my writing. Learning how to plot ahead of time is definitely a big part of that. But there’s also an undeniable thrill that goes along with discovering the story as I write.

I suspect that by the time I find my “sweet spot,” it’s going to be a little bit of both.

What’s the nuttiest thing that ever happened to you?

Daniel: I took part in a blindfolded sparring match when I was twenty. Naturally, I got my posterior parts handed to me in a pillowcase, but I was still happy that I got to push and challenge myself like that.

Later on, I found out that I was the only one who was blindfolded. The moral of the story is that you should never trust your friends. Especially when those friends are a bunch of jackasses looking for a cheap laugh.

Stuart: Yeah…I kinda saw that coming. Don’t feel bad, we all get duped my our so-called friends at some point.

If you had a superpower, what would it be?

The power to give witty, interesting answers in interviews.

Stuart: Not bad. Not bad at all.

What was your favorite toy growing up?

Daniel: I grew up in the golden age of action figures. I had G.I. Joe, Transformers, He-Man, Thundercats, Teenage Mutant Ninja Turtles, Voltron, and Rambo. How do you pick a favorite?

Stuart: I actually thought they made up Voltron for Jimmy Neutron.

Daniel: And of course, most of the TV shows I watched were basically half-hour toy commercials (I can’t be the only one who remembers that kid-friendly Rambo cartoon).

Stuart: Well thanks Daniel. I’ll be watching to see who brings home the Golden Pen. Regardless, I know we’ll be seeing more of each other.