The Chicken Or The Egg

This is a repost of a piece I wrote for Informed By Nature a while back:

Which came first, the chicken or the egg? This seeming paradox actually has a clear, specific answer, and that answer reveals as much about how we know what we know as it does about where our breakfast comes from.

To ancient philosophers, the question evoked the deepest mysteries of existence and creation. In popular culture, it’s used to imply the futility of hard reasoning. Both views are wrong—utterly wrong—and it’s easy to see why, even if the actual solution takes a little more effort. The chicken or egg question is an infinite regress, and like division by zero or answers containing infinities, this is usually a sign not of some profound truth but of a poorly framed question.

One famous example is Zeno’s argument that motion is impossible because to move any distance one must first move half way, and before that, half again, and so on. The fact that Zeno—living in ancient Greece—lacked the nineteenth-century mathematics necessary to sum infinite series and calculate geometric limits did not prevent his moving outside to address his neighbors. Another example is Anselm’s attempt to prove the existence of God. He first defined God as the greatest being imaginable, then argued such a being would be greater still if it were real and thus concluded that the greatest imaginable being must therefore necessarily be real. Among the more egregious problems with this argument are that it fails to explain why the whole of reality should be bound by the thoughts of one medieval monk and that it argues with equal force for the abominable snowman.

The correct question here is, how did egg-laying chickens come to exist? To ask “Which came first” implies a false dichotomy—a one or the other choice that isn’t real. It implies that all chickens are the same, that all eggs are the same, and that at some point in the past, one or the other must have popped into existence exactly in its present form. This isn’t true.

The category of birds we call “chickens” is a population of animals that, while very similar to one another, is every one unique. Each chicken is a blend of features from the previous generation, each egg of features from its parent hen. Over time, certain traits may be selected for across the population so that it tends as a whole to drift, from Belgian bantams, say, to Bearded Antwerps. Go back 8,000 years, and you would find red and gray jungle fowl drifting into something recognizable as modern domesticated chickens.

Chickens, like all living things, change along a messy continuum. Any particular chicken came from slightly different parents which in turn arose from even more different ancestors, and so on and so on until at some point in the past, we humans arbitrarily declare the ancestor not to be a chicken at all.

The thing is, there is no such thing—in nature—as species. This is a concept we invented to help categorize and study life. We divide modern chickens into distinct species and breeds, though no genetic barrier prevents their interbreeding. On the other hand, chickens can’t breed with dozens of other kinds of birds in nine modern orders, though countless genetic markers tell us they all descend from a common ancestral population.

The “tree of life” we all learned in elementary school is a useful metaphor, but it’s only a rudimentary approximation of how life actually changes over time. Put aside the nice, flat diagram from the biology book and picture instead a tree that branches in three dimensions and is very, very, blurry—as if viewed through an out of focus camera. 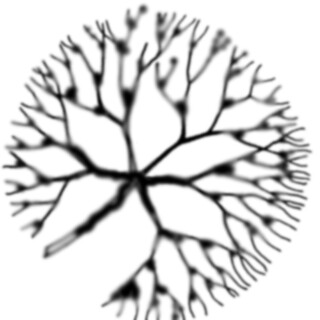 This—more or less—is how species arise. There’s no set line between one species and its neighbor. Polar Bears can breed with Brown bears if we provide the accommodations. Hybrids even occur between more distant branches, such as between jackals and wolves. How is this possible? Because every population is varied—every branch is blurry.

There was never a day when the first chicken appeared. There was only a population that gradually acquired more and more “chicken like” characteristics. The “species” of modern chickens and jungle fowl all overlap. Trace them up the tree and they join up with nine larger branches that once overlapped, but no longer do because they’ve continued to diverge. Far enough, and the branch holding the Rhode Island Red eventually blurs into what once led to certain dinosaurs.

It’s a messy, elegant progression. It never leads from one distinct type to another. It leads instead through diverging groups until time and survival raise a new species from the shadows of its origins. So now when someone asks which came first, the chicken or the egg, you know the correct answer: “Neither. Both come from an evolving population.”