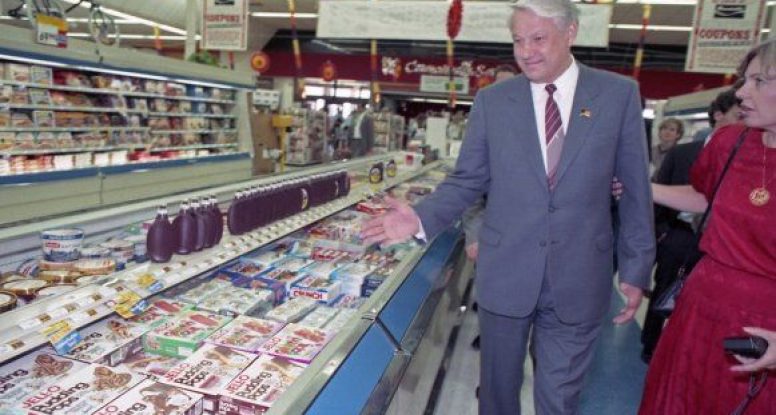 How Groceries Won the Cold War

After President Reagan died, biographers could be heard giving him  and his Strategic Defense Initiative credit for bringing down the Soviet Union. But the truth is, it was a visit to an American grocery store that did it.

In September of 1989, shortly after Boris Yeltsin was elected to the Soviet parliament, he paid a visit to the Johnson Space Center as part of the lead up to what would become the International Space Station. Afterward, he and his entourage made an unscheduled visit to a nearby Randall’s grocery store.

According to Houston Chronicle reporter, Stefanie Asin, he “roamed the aisles nodding his head in amazement.” He told his fellow Russians that if their people could see this store “there would be a revolution.” He asked customers about their purchases and about prices. He talked to the store manager and marveled over the frozen pudding pops. “Even the Politburo doesn’t have this choice. Not even Mr. Gorbachev,” he said.

Yeltsin was all smiles, but according to his biographer, he became despondent during the plane ride to his next destination. He couldn’t stop thinking about the plentiful food at the grocery store and what his countrymen had to subsist on in Russia.

Two years later, he left the Communist Party and began making reforms to turn the economic tide in Russia. The rest, as they say, is history. You can blame the Cold War or the Moon landing or bootleg Beatles LPs, but in his own autobiography, Yeltsin wrote:

“When I saw those shelves crammed with hundreds, thousands of cans, cartons and goods of every possible sort, for the first time I felt quite frankly sick with despair for the Soviet people. That such a potentially super-rich country as ours has been brought to a state of such poverty! It is terrible to think of it.”

So there you go. The mighty Soviet Union survived Stalin and Hitler and the Cold War only to be brought to its knees by pudding pops. Something to keep in mind as our own nation’s wealth is condensed into the pockets of an ever smaller elite, who complain that somehow restoring the minimum wage to its time-adjusted value during our heyday will somehow cripple the country.