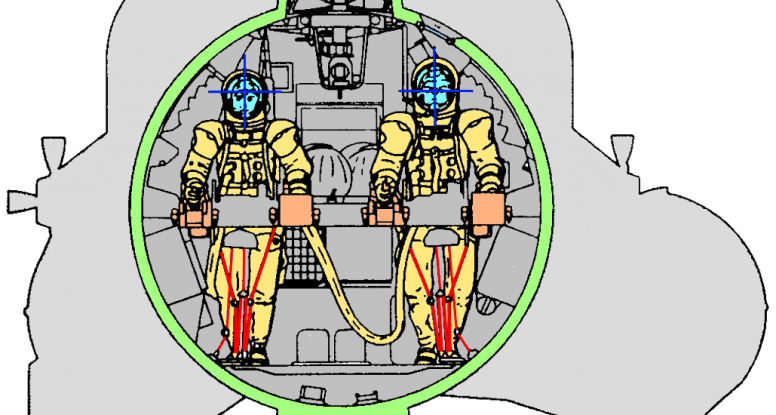 Flying by the Waist of Your Pants

There’s a scene in Ron Howard’s wonderful film, Apollo 13, when the crew is preparing to fire the LEM engine in space and Commander Lovell is Seen ensuring that his socked feet are firmly attached to the velco floor. That might well be authentic, but it leaves audiences with a mistaken notion of when flying the LEM was like during a landing.

Landings were dangerous because there was a big moon outside, just waiting to smash into you. The LEM had to maneuver, and the crew could be tossed around as it did so, just as they needed precision control. If something went wrong (as it did in Apollo 10) such an upset could elevate a minor problem into a crisis, but even under the best of circumstances, landings could be hard, and the last thing you wanted was for a suited astronaut to bang to into a bulkhead, breaking the suit or the LEM.

NASA needed a way to hold the astronauts down so they could focus on their jobs while giving them the mobility needed to move about the cabin as needed. It had to be light, it had to be reliable, and it had to be dead simple. Their solution? The Apollo LEM Crew Restraint System: The CRS involved a set of cables and small pulleys, all connected to a spring-loaded “constant force reel” mounted below the console. There were two restraints, one for each crew member on his side of the cabin. To use the CRS, a suited astronaut would turn to his side and unclip the two cable ends from a storage hook. He’d then step between the wires and clip them to a hook sewn into his suit at the waist. Then he’d unclip the center hook with its central pully, and clip that to the opposite side of his waist.

Thus secured, the tension of the force reel was distributed through all the pulleys, and he was gently held down, needing the Velcro panels on the floor mostly for traction. Pins could be adjusted to allow a crew member to move from the flight station to the docking station above.

The machines that took us to the moon were enormously complex, and it’s sometimes easy to think they all had to be–or that anything the government does is inherently over complicated.

Here is a counterexample. The solution was simple, cheap and effective, and just a little ingenious.