I’m delighted and honored that my novelette, “For All Mankind,” which appeared in the July/August issue of Analog Science Fiction & Fact has won first place in the annual Analab reader poll!

I am truly honored to appear among these names:

I’m particularly partial to Rado Javor’s July cover, under which my story appeared. 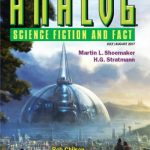 And I can’t wait to meet these folks at the party!