Today, scientists working under the National Science Foundation reported using light from nine radio-telescopes spaces around the world to record the first (radio) image of a black hole: 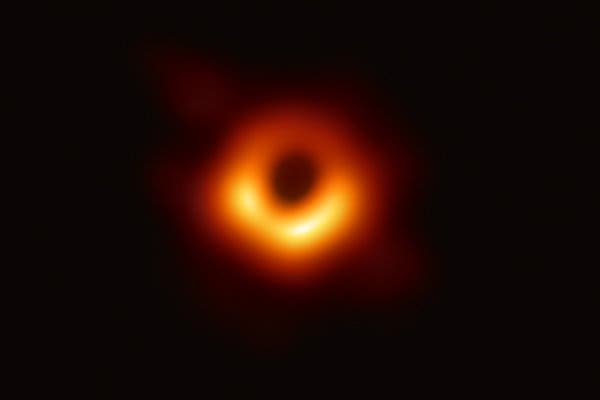 I understand the physics involved just well enough to tell you that this view of the black hole at core of galaxy Messier 87 is neither head-on now edge-on, that is, we are looking at the accretion disk at a slight angle, the the bright rings are actually light from the plane of the accretion disk folded up into a plane fairly close to facing us, with the upper, darker half dimmed by gravitational lensing. Or I could be wrong. I trust the 200 scientists who worked for five years to create this image get a lot more out of it than I do.


To me, none of that’s the point. The point is, this is the dawn of a new type of astronomy–the dawn of the planet sized telescopes.

Since about the time I was in school, the world’s first interferometric telescope–the CHARA array–has toiled away atop Mt. Wilson. CHARA is build of three medium size optical telescopes spaced across a mountain, with their beams combined in such a way as to act as a single, much larger telescope. The scientists there joked that if someone were playing baseball on the moon, CHARA could tell which team was at bat–except it can’t combine the beams without a single point source (like a star) in the frame.

A larger, more advanced interferometric array is under construction in New Mexico. When finished, it will be able to read the serial numbers off parts mounted to satellites in low Earth orbit. The Event Horizons Array (which gave us the picture above) is the size of Earth, and the data involved was combined asynchronously, by computer after the fact.

We are entering a new age of astronomy, and none of us can guess what it will teach us. One thing we do know however, is that it will soon (ish) be possible to get remarkably good quality images of planets in other star systems.

Carl Sagan once quipped, “Life is the means by which the universe can know itself.” Hey universe, get ready. Here we come.