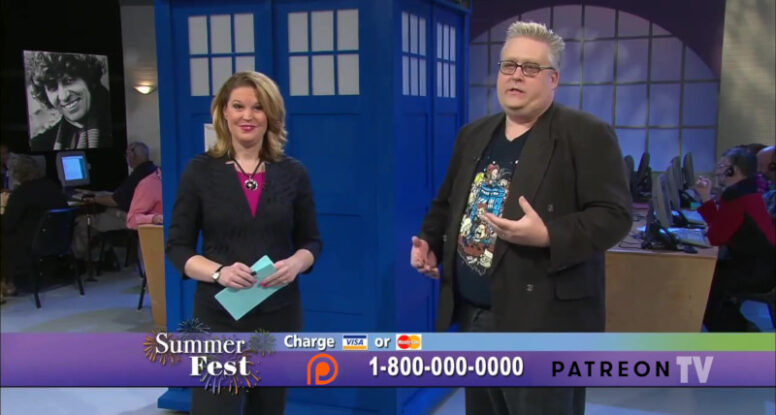 Fortunately, there’s a better way. Public Broadcasting gave us the solution to this problem a generation ago. Today we call it crowd-sourcing, but for over forty years, they’ve called it “community supported programming.”

I want to sell a novel. You guys want me to sell a novel. I know this, because several of you have written to say so. But life gets in the way. And website maintenance. And audio book post production. And print layout. And marketing. And searching for appearance locations that might make back gas money. And a thousand other things an established author might contract out, but I have to do myself to keep the IRS from deciding this whole writing career looks like a tax dodge (it isn’t).

So welcome to our winter pledge drive folks. I’m now on Patreon.

We don’t have a studio or a materializing TARDIS, and volunteers are not standing by for your call. However, if you’d like to chip in a little to support the cause, I’ll be just as grateful as that dude who dresses up like Kryton for Red Dwarf night on your local PBS station. More so really, because I can’t bring your BBC programs in return, or even weekly videos on Youtube–writing anything of meaning just doesn’t work that way. I am, however, trying to rejigger things so my time goes more into creative work, and to do that, I need to do less of everything else.

If Patreon isn’t for you, I’m also on

where you can donate some writer fuel.

What do you think about this move? About crowdsourcing in general? Leave a note and let me know.