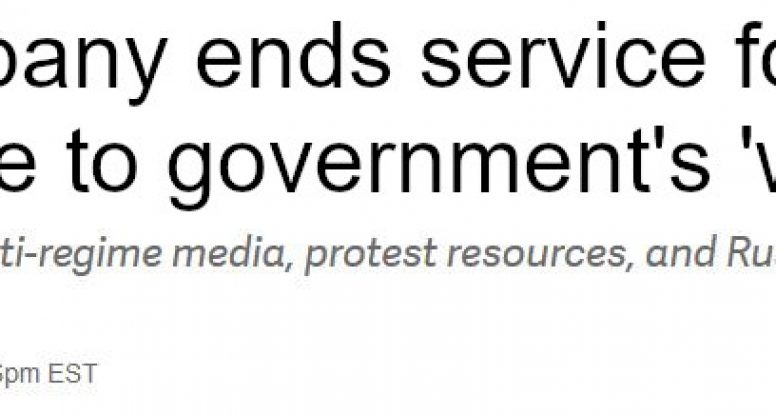 You may have noticed, there’d a war on. Of course, that’s 6,000 miles away, so it doesn’t affect me, right? I can turn a blind eye the way most people do, most of the time when atrocities and injustices are happening a quarter of the circumference of the planet away, right?

Well no, not so much. If you are reading this on my blog, there’s a small but non-zero chance you’ve noticed my website was down for over 30 hours and has been running with all but the home page broken for several days. Indirectly, this is because of that war–my hosting provider no longer has contact with the region of the world from which, for many years, it’s been getting exceptional support labor. As I write this, Vladimir Putin is in the process of walling Russia off from the global Internet so his subjects can’t be told the truth. President Biden has barred all energy imports from Russia and many other nations are likely to follow suit, though this is mostly symbolic since shipping in the Black Sea essentially stopped the day Lloyd’s of London declared it a war zone. International sanctions mean that all Russian airlines are now required to return half their airplanes, all but 170 something of which are leased from Western companies for efficiency. And they’ll find a way to do it, too unless Putin puts a gun to their heads. They want this madness to end so they can go back to making money, and to compete in the global marketplace, they need more than permission to fly outside Russia, they need those leasing agents and access to tech support in the US and maintenance facilities in Germany.

Meanwhile, Ukraine isn’t just firing tank and aircraft killing missiles from the US and Western Europe–it’s firing its own, made with parts designed by a design company in Belarus–one brown shirt national thug nation supplying a goodly portion of Putin’s army of pointless conquest.

Putin claims he can’t abide NATO expansion toward Russia’s borders. This is absurd, in part because NATO was created to protect its members from a USSR hell bent of ideological colonization of the planet and in part because since the fall of that empire, the expansion of the alliance has been driven not by the US or other Western powers but by the well-founded fear of Russia’s neighbors. Russia has nothing to fear from NATO if it stops invading other countries, and those countries have no reason to join NATO unless they fear Russian beligerance.

Meanwhile, NATO or no NATO, economic ties binding Russia, the West, and all the former Soviet satellites had done more to ensure Russian security in the last 20 years than all the wars and “special military operations” fought by Putin or his predassesors all the way back to the iron age–until he pissed all that away in a week.

The best defense against attack is close economic partnership. Best, because it both fosters the communication and partnership needed to work out disputes without recourse to violence and greatly lessens the need for spending on defense.

The people of Russia, Ukrain, Belarus, and for that matter, Finland and Texas, have no interest in empires. They just want to raise their kids, see if Elon Musk really does die on Mars, and get prompt support for their website when they need it.

Wars of conquest are stupid. They serve nothing and no one but the egos of the men who start them. Thus, those should be the first to die when the shooting starts.