The Reviews Are In!

I am over the moon (no pun intended) at the reception this story has gotten. It’s hard Scifi–as in real-world science and hardware that either actually existed in 1969 or really could have, and it’s long–novelette length in an era where flash prevails. I knew when I wrote it that Trevor Quachri at Analog was my first, best, and maybe only market.

But Trevor bought it–Yay! And he put my name on the cover (a pretty big deal, since this is only my second sale to Analog and there are 16 other authors in the issue)–Yay! And he hired the great, Hugo-winning artist, Vincent DiFate to do a full, two page illustration–say what?

And now the reviews are in:

How to Get Rich in the Writing Business

I survived two weeks at nearly 9,000 feet. I critiqued thirty-three stories and a quarter-million words. I helped plot three novels, including my own. I wrote a nearly-ready-for-publication draft of a short story in two days. I had dinner with George R.R. Martin and Steven Gould. I hiked an alpine trail and got barked at by ravenous prairie dogs.

Now, it is with a heavy heart that I big adieu to a whole pose of talented, fascinating people, many of whom I expect to see great thing from–and do great things with–in coming years.

Taos Toolbox. It’s been different things to different people. If I’m honest, I signed up partly because I’ve always been a bit jealous

Stuart: Introduce yourself. Who the hell are you? What might surprise your friends? 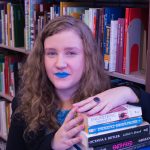 CL: Hi there! I’m C. L. Kagmi. Wandering writer, armchair scientist (I used to assist actual scientists before striking out on my own), and adventurer competing for Most Interesting Woman In The World Title.

Stuart: Ah, yes. That’s like…one of the x-prizes isn’t it? So what’s your entry?

CL: I was very predictable for the first 25 or so years of my life. Obtained a degree in Neuroscience and served as research coordinator in a children’s hospital. It was great work – but I’d never shaken my love for writing, or my desire to voraciously study any subject I chose.

Stuart: I hear you. I was much that same. I used to write radio plays and put them on with my sister. One day it occurred to me that I was still working on them but hadn’t done anything concrete in years.

CL: I’m told that I used to tell stories in stick figure comic form before I could properly pick up a pen. I believe at one point I filled a blank notebook with hilariously-spelled attempts to write Land Before Time fanfiction

Next in this year’s interview series, say hello to Ziporah Hildebrandt, who joins us from Hollywood during her workshop week. 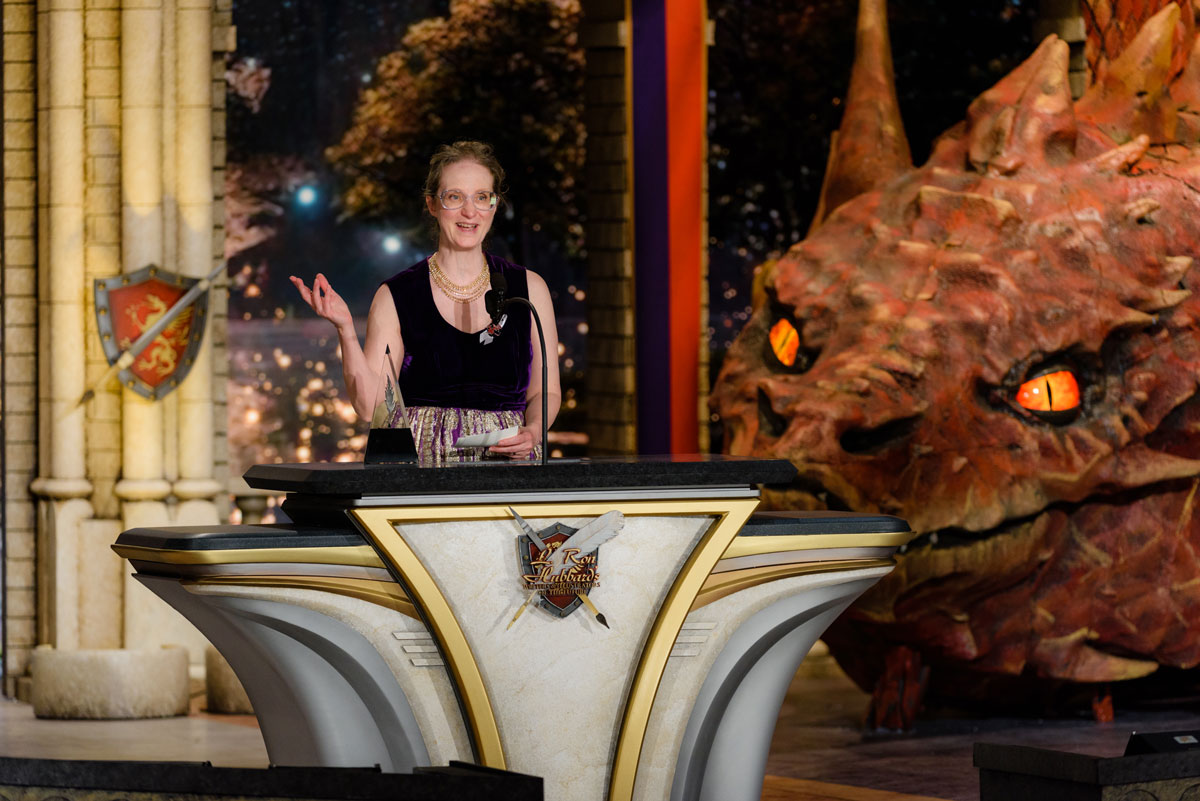 Stuart: Ziporah, hello, and welcome to the Writers of the Future family!

Ziporah: Hi Stuart, thanks for inviting me to visit.

Stuart: To start us off, what can you tell me about yourself that would surprise your friends?

Ziporah: Well, I don’t know about friends, but I have a Post-it with “Surprise!” written on it that I move around the house to make my husband laugh when he opens a drawer or picks up the dustpan.

Ziporah: I grow heirloom garlic, breed tree peonies, and dye silk with homemade plant dyes from my garden, using traditional Japanese shibori methods as well as my own designs. I also like to take photos of flowers and ice and clouds.

Ziporah: I grew up down the road from the estate used in The Philadelphia Story with Katherine Hepburn.

Stuart: Andrew, congrats and welcome to the family. Tell us who you are. 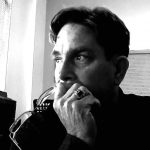 Andrew: I am from San Lorenzo California. I live in the house I grew up in. When I was growing up, I had a backyard with a huge tree and an older brother with which to share it. My favorite hiding spot was – and remains – my imagination. You should come and visit sometime. It has lots of interesting rooms.

Stuart: (laughs) Do you have any hobbies?

Andrew: I’m an experienced potter and used to play ice-hockey at the most ungodly hours of the night.

Next in this year’s Meet the Winners series, please welcome Jake Marley! 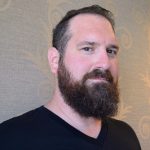 Stuart: Introduce yourself. Tell us something that might surprise your friends.

Jake: Well, I’m Jake Marley, and I’m from Orange County, California. While I think that by now my friends and family know I like to write, I don’t believe any of them realize how obsessed with books and stories I am. I’m always reading or writing. Always getting better. I only ever really talk about my stories with my wife, so most people in my life might think it’s a hobby rather than an obsession.

Since winning the Writers of the Future contest myself, I’ve made it an annual tradition to interview some or all of each year’s winners on my blog. It’s fun, it’s a nice welcome, and it’s a great way to meet new friends.

As always, I’m kicking off the series this year with a veteran, the wonderfully amiable, Mathew S. Rotundo, who won in 2009. I’ll start off by saying the Matt and eight other former WotF winners has contributed a reprint to our anthology, The Future is Nigh and it’s no exaggeration to say that it would be a bargain at $15 in hardcover, it really is that good. But enough of that.

Stuart: Matt, welcome! Thanks for dropping by. 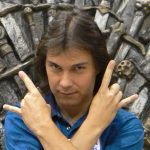 Matthew: Thanks for having me!

Stuart: No problem. See, this is great, because we’ve hung out at the SWFA table at conventions and worked together on the odd project, but we’ve never really gotten the chance to talk. Tell me, and my many dozens of mostly loyal followers, who you are. Where do you hail from?

Matthew: I’m from Omaha. As in Nebraska.

Stuart: Home of Mutual of Omaha’s “Wild Kingdom.” Do you know the guy with the animals?

Matthew: Umm…yeah. More, where the corn is. But we have indoor plumbing, so we’re doing OK.

I’ve lived here all my life, actually, except that I was born in Germany. My dad was in the Air Force and was stationed overseas 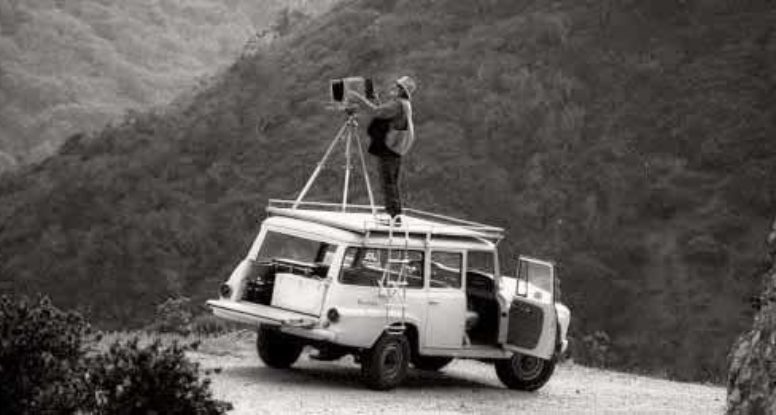 The Power of Determination

Back in the day, I used to be quite an accomplished amateur photographer. I sold crafts to save up enough money to buy a good, cheap, Korean made 35mm SLR camera. I carried my gear in my daddy’s old military helmet bag and built a studio in what had been his  wood shop. 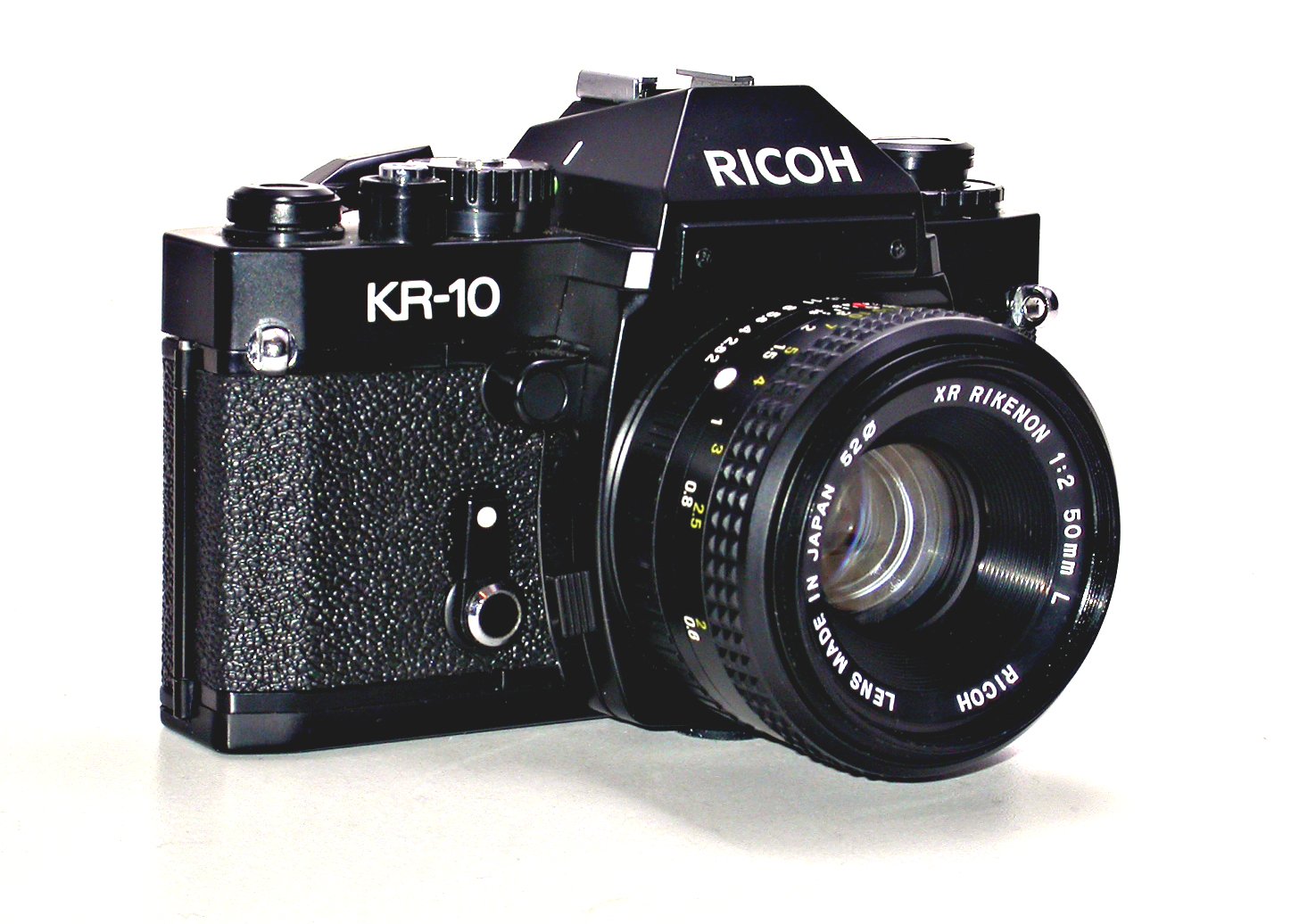 For a while, I entertained the idea that it might be my career, though I eventually realized my true talents lay elsewhere and let it go. But for several years, I had my own subscription to Popular Photography, and I’ll never forget one particular article that made a big impression, one that frequently come back to me today.

“An amateur,” said the article, “Will shoot one roll of film during a vacation, get only two or three good prints, and consider it a failure. A professional will shoot five rolls in one session, 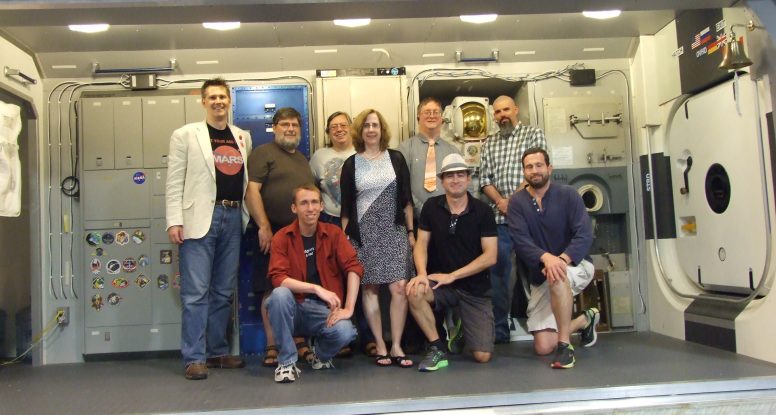 One of the best parts of winning the Writers of the Future contest was the resultant entrée into the family of fellow winners, judges and other participants in the contest. That word “family” is chosen with care. On the whole, we are not the most social lot, but our common experiences and interests draw us together much like the shared history and blood of a family. And like any family, our network of relationships grows richer and deeper with each passing year as more friends, contacts, and experiences are woven in to the fold.

Last summer, my first WorldCon, was a week of “Hey, I know you from Facebook,” and, “I love this place–everyone gets my jokes.” In February, I attended Kevin J Anderson’s Superstar Writing workshop, and joined a whole other—but overlapping—family. This year’s WordCon (MidAmericon II, in Kansas City MO) had very much the character of a family reunion. 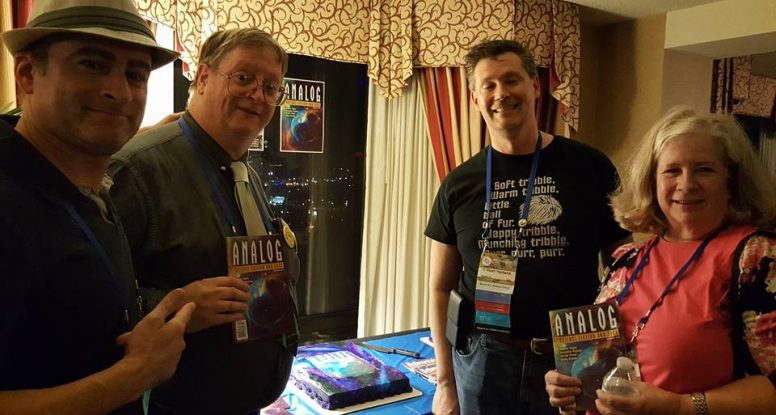 August 21, 2016January 27, 2017 0 comments
This week I was in Kansas City for Worldcon (MidAmericon II).
For a writer, the purpose of attending is less to learn or have fun than to attend what we call “bar-con,” meeting and greeting those we do business with or hope to do business with at the bars and parties after the official programming day is done.
So Friday, I get intel that there’s an Asimov’s party at the Science Fiction Writers of America suite, and I head up with some of my Writers of the Future siblings and a friend who works at NASA here in Houston (Hi Dom!), and what do we find?