Let me introduce you to my new writer friend, 2016 Writers of the Future winner, J.W. Alden. 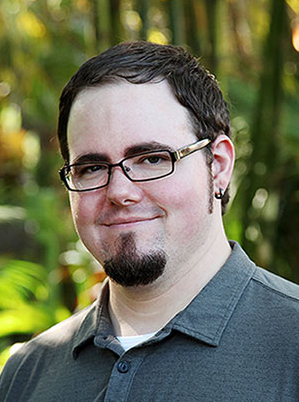 J.W.: Well, I’m a native Floridian who never got used to all that sun. I had my fair share of bike rides and backyard shenanigans, but for the most part I preferred to stay inside where the books and video games were. This probably fueled the overactive imagination that led to my eventual love of writing. Though if you had asked Little Kid Me what I’d be doing at 30, he’d probably guess by now I’d be the first professional wrestler chosen by NASA to become an astronaut. It turned out this was not a viable career path.

Stuart: Perhaps not, but it would make a smashing short story for Unidentified Funny Objects. So aside from an aversion to solar radiation, what got you into writing?

J.W.: My second grade teacher. I told her I wanted to be an astronaut when I grew up and she asked me to write about it. I fell right into her trap.

About four years ago, I was driving a forklift in a warehouse. I worked the graveyard shift, then came home as the sun rose, and spent the morning writing. Then one night, as I was heading out the door, my wife stopped me and said, “When are you just going to be a writer?” I must have seemed perplexed, because she added, “Just quit your job. You don’t need it. You’re a writer.”

Stuart: Indeed. When we were packing up to leave my year at WotF, we asked Tim Powers if he had any parting advice. “Yeah,” he said, “Marry into wealth.” How long have you been entering WotF?

J.W.: This was my second time entering the contest. The first time I entered, I was still a baby in the craft and received a well-deserved R. Being unaccustomed to rejection at the time, I became discouraged and didn’t enter again. After a few years of steady improvement and a handful of confidence-inspiring sales, I thought I ought to give it another shot. So, I vowed to buy all the anthologies, analyze the winning stories, and enter every quarter until I won or became ineligible. At the time, however, the current quarter’s deadline was coming up before I’d had a chance to enact this grand strategy. So I entered an older story to keep my promise of never missing a quarter. That story ended up taking 1st place, ruining all of my elaborate plans of engineering a winning story.

Stuart: Well it was an excellent strategy, and remains so. I still regularly read Hugo winners and such from current and ancient years for inspiration and tutleage. Star Trek or Star Wars?

On one hand, Jean Luc Picard was basically my TV-dad. Remember that scene in The Cable Guy where Jim Carrey laments, “I learned the facts of life from watching The Facts of Life! Oh, God!” Well, I developed my moral compass watching Captain Picard berate Wesley Crusher.

On the other hand, I probably wouldn’t be writing science fiction and fantasy today if not for Star Wars. In my favorite child photo, I’m holding a Return of the Jedi storybook at around five or six years old. Those movies instilled the first spark of wonder in me that made me fall in love with this genre. For this reason, if you held a lightsaber to my throat and made me choose, I’d have to go with Star Wars. Love them both, though.

Stuart: This is, of course, the correct answer. You have done well, young Padawan. Are you a pantser or a plotter?

J.W: I started out a pantser. Stephen King made it sound like the One True Way in On Writing. But as I grew in the craft over the years, it became clear that plotting works best for me.

For many writers, I know the first draft is the fun part, whereas revision is the part that feels like work. For me, it’s the opposite. When I’ve reached the revision stage, I feel I’ve done the heavy lifting. I lugged that big block of clay up onto my desk. Now I can mold it and shape it into something pretty. The blank page is far more intimidating. Outlining at the beginning of the process relieves a lot of the “WHAT NOW, WHAT NEXT” jitters the first draft used to bring. There’s no need to panic with my hand on the helm. The ship has a course.

I never feel handcuffed to my outlines, though. I allow room for discovery, especially when it comes to character. If I feel like the story wants to tug in a different direction, I let it.

Stuart: Man, you said a mouthful. Revision is awesome. It’s where you scrub the snot off your prose and let the miracles shine. I LOVE it! If you had a superpower, what would it be?

J.W: I wish I could stop time. I’ve always been a slow writer. Pausing the clock would solve so many problems. Not only would my productivity soar, but I’d never again feel guilty for spending too much time on the internet. Or playing video games. Or anything I want with no temporal consequences! I could have sickening amounts of fun all day and still pump stories out like there’s no tomorrow (because there would be no tomorrow until I commanded). I could be a literary machine. I could write ten novels a year. Come to think of it, this must be how Brandon Sanderson does it, right? He stops time? Yes, that must be it.

Stuart: Clearly. And boyish good looks. Tell us about your winning story

J.W: My story is called “The Sun Falls Apart.” It’s about a boy named Caleb who has never seen the sun. Boarded windows and a fortified door have kept the outside world a mystery his entire life. The only way out is passing the strange tests his parents conduct on him–tests that require Caleb to grasp at a power he doesn’t understand.

I wrote the earliest draft at Odyssey Writing Workshop in 2013. The pressure cooker environment of Odyssey forced me to produce a complete story on a tighter deadline than I’d ever experienced before (though the 24 hour challenge at the Writers of the Future workshop has since blown that out of the water), and I found myself turning toward this old story nugget that had been rattling around in my head for years.

After Odyssey, I came home burned out creatively, as is common for writers who go through intensive workshops. I needed time to digest all the knowledge swimming around in my skull before I could return to those stories. The draft that would become my 1st Place story languished in a cardboard box for a long time before I finally fished it out into the daylight. With the help of the feedback I’d gathered at Odyssey, I hammered that first draft into one of my favorite stories. I’m beyond delighted that it found its home with Writers of the Future.

Stuart: Nothing is more precious to the writer than unvarnished feedback. So what’s you’re favorite genre?

J.W: Another tough one!

Earlier, I mentioned Star Wars instilling my first love for SFF, and it’s true. But looking back, Wizard’s Hall by Jane Yolen is the book that made me love reading. It kickstarted a hunger for the written word that has never let up, and I think part of me will always associate that feeling with fantasy. I gobbled up all the science fiction I could get my hands on as well, and I still love both genres. But fantasy brings me a sense of freedom that I don’t always associate with science fiction. I feel like it gives my imagination a wider playground.

As such, my own work has leaned further toward the fantasy side of things as I’ve developed my writerly powers. The scifi stories I write tend to be on the softer side, often to the point of feeling like fantasy with science fictional trappings. I think it comes back to that sense of freedom. With science fiction, the author has a certain responsibility to the reader to keep accurate science at the heart of things, especially as you climb higher on the hardness scale. You have to play by the rules. Not that this isn’t true of fantasy as well, but with fantasy you get to decide what those rules are. With science fiction, I control the plot, the characters, their lives. With fantasy, this control extends even deeper, all the way to the very fabric of the universe they live in. I’m not just a storyteller; I’m a god. And it feels pretty good to be a god. Maybe not as good as a pro wrestling astronaut, but pretty damn good.

Stuart: Agreed. I started out with hard scifi. I still love it, but the more I write, the more I realize the story’s the thing. So now that you’re back from tinsletown, was the best part of the workshop?

J.W.: The big art unveil. It’s always awesome when you talk to a reader who really got your story, but it’s something else entirely when they take that understanding and make art of their own.

Stuart: Yeah, that still makes me smile. So what’s next?

J.W.: I want to keep the momentum going. I have a couple of stories in the oven awaiting revision, including the one I wrote at the workshop. Hopefully I can keep making sales and getting my name out there. I’m also looking to make the transition from short stories to novels this year. I’m excited (and a little terrified) at the prospect of traversing this unfamiliar length.